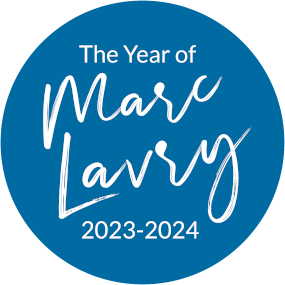 By Frank P. Gill, Music Writer
(Estimated to have been written around 1955) 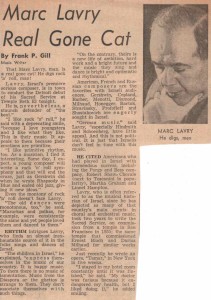 That Marc Lavry, man, is a real gone cat! He digs rock ‘n’ roll, man!
Lavry, Israel’s premiere serious composer, is in town to conduct the Detroit debut of his Sacred Service at Temple Beth El tonight.
He is, nevertheless, a staunch defender of “the beat.”
“I like rock ‘n’ roll,” he said with a deprecating smile, “because I love youngsters and I like what they like. This is their music. It appeals to them because their emotions are primitive.”
“I like primitive rhythm, too. As a musician, I find it interesting. Some day, I expect, a young composer will write a rock ‘n’ roll symphony and that will end the craze, just as Gershwin did when he wrote Rhapsody in Blue and ended old jazz, giving it new ideas.”
Even the monotony of rock ‘n’ roll doesn’t faze Lavry.
“The old dances were monotonous, too,” he said. “Mazurkas and polkas, for example, were consistently the same and yet people loved them and danced to them.”

RHYTHM intrigues Lavry, who finds an almost inexhaustible source of it in the folk songs and dances of Israel.
“The children in Israel,” he explained, “express themselves in the music of our country. It is happy music. To them there is no music of lamentation. Music from the Diaspora or the ghettos is strange to them. They don’t associate themselves with such things.”
“On the contrary, their is a new life of ambition, hard work, and a bright future and the music they sing and dance is bright and optimistic and rhythmical.”
America, French and Russian composers are the favorites with Israeli audiences. Gershwin, Copland, Barber, Menotti, Diamond, Milhaud, Honegger, Bartok, Stravinsky, [Prokofiev] and Shostakovich are eagerly sough in Israel.
“German music,” said Lavry, “especially Hindmith and Schoenberg, have little appeal. And this is not political, It is just that Israelis don’t feel in the tune with this music.

HE CITED Americans who had played in Israel with tremendous success, including the Porgy and Bess company, Roberts Shaw Chorale (next to Toscanini in popularity), Martha Graham and Lionel Hampton.
Lavry who is often referred to as the musical historian of Israel, since he has depicted so many of that country’s main events in choral and orchestral music, took two years to write the Sacred Service, on commission from a temple in San Francisco in 1955; the same temple that commissioned Ernest Block and Darius Milhaud for similar works earlier.
Just recently he wrote and opera, “Tamar,” in New York in five weeks.
“I stayed in my hotel room constantly until it was finished,” he said. “My doctor was furious because it endangered my health, but I liked doing it,” he added smiling.