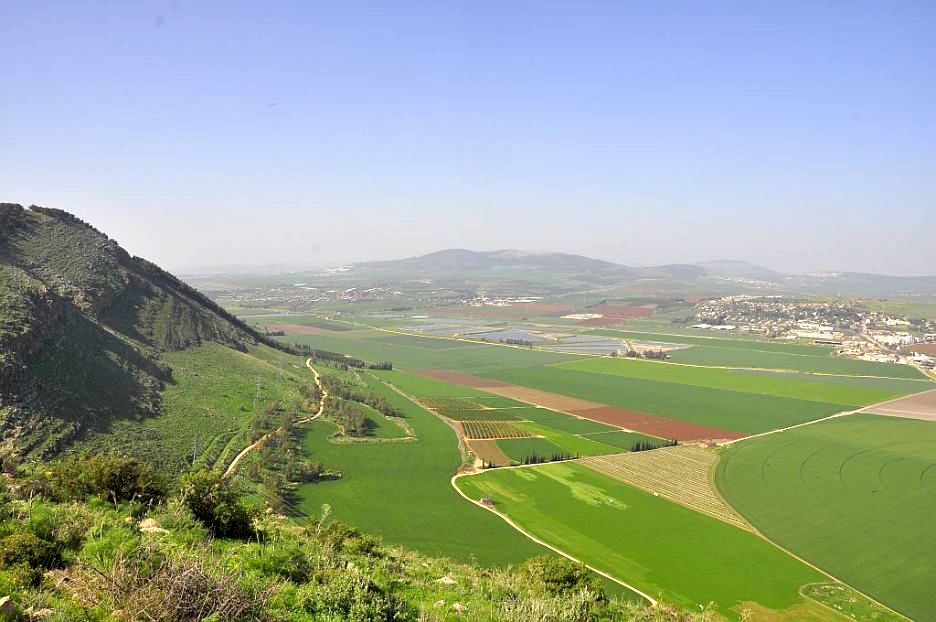 A historical performance conducted by Marc Lavry:
Lavry performed the Symphonic Poem Emek numerous times with different orchestras around the globe. This is one of the few remaining recordings.
Marc Lavry, Conductor
Kol Israel Symphony Orchestra (The Broadcasting Service Orchestra)
Year: Unknown
Unfortunately, the first second of the recording is missing.

Synopsis:
Marc Lavry’s Symphonic Poem Emek was written in 1937. It is based on his song “Emek” composed to the lyrics of Rafael Eliaz two years earlier.
Programmatic in nature, Lavry was inspired by the pioneer workers in the Jezreel Valley (Emek Israel) struggling daily to drain the swamps. At night they celebrated with song, dance and romance. The poem follows one such typical day.
The music slowly builds up to depict the beautiful and pastoral landscape of the valley, and develops into a rhythmically exciting ever-accelerating Hora dance.
Upon its first performance in 1937 Emek became an instant hit. It was, for many years, and still is the most frequently performed Israeli composition.

Symphonic Poem Emek was chosen by Conductor Leonard Bernstein in 1950 as the representative Israeli composition for the first American tour of the Israeli Philharmonic Orchestra.

Emek was premiered on June 17, 1937 at the third symphonic concert of the Palestine Orchestra (the predecessor of the Israeli Philharmonic Orchestra) at the Rina Park in Tel Aviv, conducted by Marc Lavry.

In the program notes of another concert of the Palestine Orchestra Lavry explains: 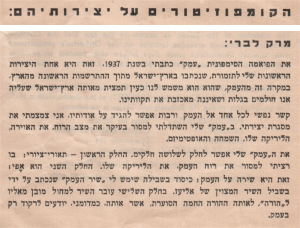 I wrote the Symphonic Poem Emek (Valley) in 1937. It is one of my first compositions for orchestra written in Israel. [These compositions] are the outcome of my first impression of the country, and in this case – the [Jezreel] Valley serves as the essence of Israel about which we dream in exile, and which never lets our hopes down.Everyone has an emotional connection to the Valley and much can be said about it. I narrowed down the framework of my composition. In my Emek I tried to express mostly the mood of the valley, the atmosphere, its lyricism, joy and optimism.

My Emek can be divided into three parts. The first part – picturesque, where I wanted to convey the spirit and lyricism of the Valley. The second part is epic. It is the poetry of the Valley, based on my Shir Haemek (Song of the Valley), that I composed to the excellent lyrics by [Rafael] Eliaz. In the third part the song turns into a Hora Dance, the lively exciting dance that, I believe, is properly danced only in the Jezreel Valley.

Music Review:
Klagenfurt dances Horrah Emek
Amos Talmon, Music Director of grand Symphonic Series, now at its eighth season in Herzliya, conducted recently the Kaerntner Symphony Orchester, Klagenfurt, Austria. This was the very first appearance of an Israeli conductor in Klagenfurt , where the MUSIKVEREIN is in fact older than the one in Vienna by three weeks… Talmon was invited to conduct the opening concert of this season: Upon Talmon’s suggestion, the concert opened with the Israeli symphonic poem “EMEK” by Marc Lavry. Talmon: “ I was a bit concerned as to how an Austrian orchestra would adjust to Emek, particularly to the Horrah dance rhythm which is unknown to the European ear. I was also a bit apprehensive as to how the Austrian audience in Klagenfurt would react to it. I am delighted to say that the orchestra, both in rehearsals and in the concert performed Emek wholeheartedly with great precision, sentiments and enthusiasm. The same goes for the audience: I have performed Emek in four corners of the world: This was the warmest reception Emek has ever received, with on going Bravo shouts and standing ovations.