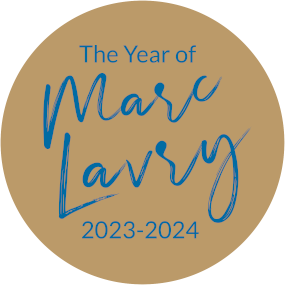 Just before the concert of Marc Lavry’s compositions at the Jerusalem Radio concert hall tonight — the composer and conductor shared with our representative a few words about his method of composition and other topics.

The fact is that my creative process utterly changed since I arrived in this country. Everything I write here, without so intending, relates to either the country’s past or its current events. It seems that I entered a path leading to national Israeli music.

As we know, the foundation of national music is first and foremost in the original theme and the original rhythm. These two create its unique character. This is the way taken by many of the greatest composers around the world. For example: Mussorgsky, Borodin, Rimsky-Korsakov for the Russians; Dvorak, Smetana for the Czechs; Debussy, Ravel for the French; Albéniz, Granados, de Falla for the Spanish; Grieg, Sibelius for the Nordics, etc. etc. Every one of these artists was nursed on folk melodies, and almost all of them leaned on a predecessor in folk music, even those who were less important.

We, here, are still dealing with national music in its infancy. Yet it seems that we, too, need to focus on the thematics and special rhythm unique to us and our language, as the basis for our artistic creations.
And I try to emphasize these two elements in my works. But because developmentally we have lacks in this area, I know and recognize that we cannot underemphasize these basic elements.

Tonight’s concert will include three of my compositions: “Al Naharot Bavel” (By the Rivers of Babylon), the first composition I wrote in Israel in 1935, which is a lament on devastated hopes, a song of repentance and regrets.

Also will be performed Symphonic Poem “Emek”, composed in 1937, and was inspired by my first impression of the country, of the [Jezreel] Valley. In the first part — narrative-illustrative — I tried to convey the spirit of the valley, its lyricism; the second part — epic — is based on Eliaz’s excellent poem (Shir Ha’Emek / Song of the Valley); the third part — dance — naturally evolves into a Hora Dance.

My “Concerto for Violin and Orchestra” is one of my most recent works, from December 1938. This is a pure concert composition, though here too one can find much that I could not have written anywhere other than in Israel. The concerto has three parts, but I made some changes to the conventional format. The first movement — Allegro with Cadenza; the second begins with cadenza that transforms into an allegro; the third — Vivace in dance rhythm.

References:
1. With the permission of the Historical Jewish Press: www.jpress.org.il
2. The Pinhas Lavon Institute for Labor Movement Research: http://www.amalnet.k12.il/LavonInstitute